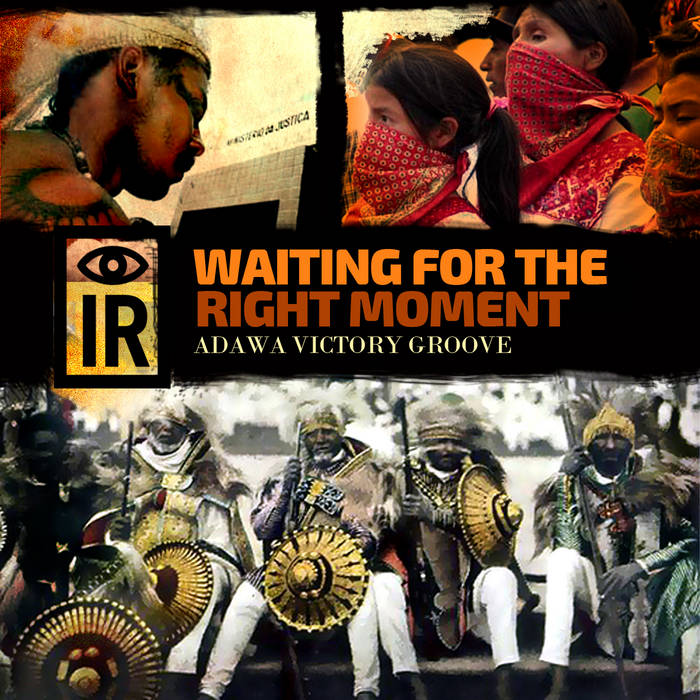 Humans first stood tall in Africa. This track begann there as well.

In Ethiopia are the Adwa Mountains. The West, aka European civilization, should remember what happened there, but sadly if you are going to discuss Adwa you will get blank stares or indifference. Italy was defeated there. In 1896. By a brilliant partnership between Empress Taitu and Emperor Menelik. The Ethiopian tactical acumen was exemplified by the Empress, a brilliant strategist she was, cutting off the Italian's access to water before the start of the battle. Let that sink in. Before the start of the battle. March 1st, 1896 marks the first occasion where an African nation defeated a European world power on the African continent. It was a victory that inspired many at that time fighting for their independence against colonial powers.

IR felt this little remembered fact of history should be honored. So The Ghost traveled to Tigray province in Ethiopia and started sowing the seeds of the song. On the mountaintop, he wrote and recorded the chorus, which is sung by a young Ethiopian dubist. The words are an ode to the victory of the Ethiopians. Italy was so shocked, and disappointed by the victory, they could not accept that their proud army had been defeated by an African nation, so much so that some newspapers even substituted photos of Russian generals instead of Ethiopian generals in the reports of the battle, relegating the win to another white superpower instead of African patriots fighting to keep their sovereignty. Empire builders seem to forget this time and again and think power and might trumps all: Vietnam, Nicaragua, Algeria , Kenya. This victory at Adawa was crucial for Ethiopia's future and allowed them to be a nation who never fell under colonial rule.

To IR, this victory has immense significance in the global fight against colonialism happening right now.

The genesis of the track began in a small simple African village. Here The Ghost wrote a mixture of lyrics and a collage of different phrases of indigenous philosophy that had been recounted to him. Some of these philosophies can be found documented in our book "IR 30 Indigenous Visions Of Dub". The Ghost also pulled in influences from "Africa Anarchism: The History Of A Movement", "The Native Creative Process", and the album "When The Veneer Of Democracy Starts To Fade" as he created the lyrical framework. IR was very aware of the fact that what we were creating would not fit into a conventional song structure: IR wanted to create something that would be food for thought for activists and those contemplating ACTION. The Ghost knew this was an idea-laden track, but it had to groove as well.

This collage of lyrics and philosophy and idea upon idea was then sent to singer songwriter Madame Cristiane Delores aka Christiane D of Pittsburgh, PA to mold into a melody and form, songlike, but still different. The song was to be IR's response to the questions and concerns The Ghost has heard through his travels. People concerned and feeling uncertain in the face of what they perceive as mounting danger and chaos in the world. We wanted to take another viewpoint and point out the positives and that could taken out of what could be described as situations of "chaos".

As the lyrics for this track states: "you can't order the universe but you can find what natural forces are in it that you need to do things right. You must be comfortable with chaos and depend on it to get things done. Chaos is the opportunity to thrive, grow, the realization nothing is fixed; movement, change is the possibility."

In a time when people are feeling very insecure we also wanted to impart a notion of trust as a foundation; the importance of people trusting themselves and trusting their intuition.

Dutty Bookman at the launch of his book "Fatidic: selected Duttyisms" said something that resonates with the spirit of this project "lets not be afraid to say what we need to say...lets just do it...we live in a time where there is so much chaos in the world so much danger in the world we just have to put up a barrier against the fear of living in these times...and just free up!"

As Christiane D worked on reshaping the lyrics her revisions were sent to Tapedave and The Ghost who provided feedback and additional thoughts and lyrics. This back and forth via email continued until IR had the messages they wanted.

Producer and beatmaker Herman "Soy Sos" Pearl created a rough mix of beats that was built around the Adawa chorus recorded by The Ghost in Ethiopia. This basic glimmer of a track was relayed to Asian Dub Foundation members, guitarist, Chandrasonic in England and bassist aniruddah Das in Belgium. Even though ADF at the time were in the midst of hectic live gigging including dates playing their original live soundtrack to the film "La Haine", Das and Chandrasonic sent us their parts by email. Their contributions perfectly matched the tone of what IR wanted to create. ADF are incendiary and brilliant, especially when taken in live. Make an effort to catch up wiith them!

By dub coincidence Christiane D recorded her vocals at Soy Sos' Tuff Sound Recordings on March 1 , 2015 which also happened to be the anniversary of the Battle of Adawa.

IR first became aware of the work of Christiane D and Soy Soy years ago when a dubist conspirator Prasonik turned us on to their work with the group "3 Generations Walking" who did a great house inflected version of a Burning Spear classic "Slavery Days" and then we found their work in their band "Soma Mestizo". IR was amazed when they heard the dub-beautiful soaring vocals of Christiane D because they were exactly what they envisioned for a new IR track. This lead IR to contact them and with them we created a collaboration "Eagle Screaming Red Sky Alight" that also featured Pandit G of ADF, Adrian Sherwood, Chuck D and Omar Perry. It was the first of various collaborations done with Soy Sos and Christiane D. Soy Sos' dub intuitive approach to mixing has resulted in some of IR's favorite collaborations and again he wove his mixing magic on these mixes. Its a dub tapestry mix full of sonic details with Brazilian tinged percussion adding to a flowing groove. Legendary mastering engineer Kevin Metcalfe added his own subtle nuances to the mix at Soundmasters in the UK. His touch can be especially felt on the "Silent Warrior: Empress Taitu Cutting The Pathway To Victory Mix". Kevin's mastering accentuates the subtle tasty grooves driven by Aniruddah Das' propelling bassline and the quietly menacing guitar work of Chandrasonic. The mix title is a reference to the prowess of the Empress as she commanded her battalion on the battlefield at Adwa.


IR was very pleased with the final result and the dub creative process. We wanted to share a communication we received from Aniruddah Das because for us it perfectly sums up perfectly what we were aiming for with the track:

"There is such a feeling of forward motion-but not rushing-measured, informed, disciplined and determined, like a people's army, as the lyrics state "waiting for the right moment". A good example of the music itself illustrating and pre-empting the lyrics. Soy has made a very intelligent placement of all the elements - using the stereo field as well as volume levels. It's a metaphor for collective action, where everyone gives each other space, takes responsibility and gets on with their role without waiting to be told what to do nor having to tell anyone else - intuition and anarchism. When I heard the implied anarchism in the lyrics my face lit up with recognition. A present and future anthem."

It is IR's hope that this track can make some contribution to fueling the spirit of resistance around the world. A resistance we see different parts of the world exemplified by the contribution of the Rebel Youth in Colombia, who we work with, and those in West Papua who continue to fight for their freedom against the tyranny of the Indonesian government. Not an exhaustive list to be sure, there are more than a few places around the world where human rights must be attended to. We hope this track drops in on them as well.

The videos for these mixes were created by Colombian filmmaker Santiago "Dangerous Editor" Ospina. The production reflects IR's creative approach. We find collaborators who we can trust resolutely. IR's only instruction to Santiago was relaying this personal anecdote to him: "That sometimes the most hardcore things we have said directly to the faces of authority has been said with such soft voice and so calmly that it took them till the next day to realize the magnitude of what we said. By that time we had already disappeared (to the frustration of the enraged authorities)."

This sets the tone for the very lyrical and poetic visuals created by Santiago as he travelled through Peru, Bolivia and Ecuador specifically filming material for these videos. We suggest to watch with an open mind and to pay attention to the small details as he shows you some indigenous reality in South America. You can get a further insight into his videos for this project here [https://irdangerouseditor.wordpress.com/2015/06/12/8/]

Visuals are an essential and vital part of this project, Brazilian designer Dubdem worked tirelessly creating artwork which drew on the triumph of the Ethiopian victory and wove in successful moments of indigenous resistance in Mexico and Brazil. Dubdem has created special free posters matching lyrics and images that can be downloaded and easily assembled to create giant posters for some extra guerilla street actions.
Visit the DUBDEM website www.dubdem.com.br where you can download a wealth of free music,art and books.
This EP will be released in conjunction with a new IR album "IR54 If Thomas Sankara & Fela Kuti Were Here They Would Say FREE WEST PAPUA"
It will feature among other things collaborations I R has done with DHANGSHA the new experimental electronic music project of Aniruddah Das.
Special shout out to Dub In The Shadows of the IR crew in Colombia
who helped to propell this release .