IR 34 Galdino Truth Is What We Need Dub 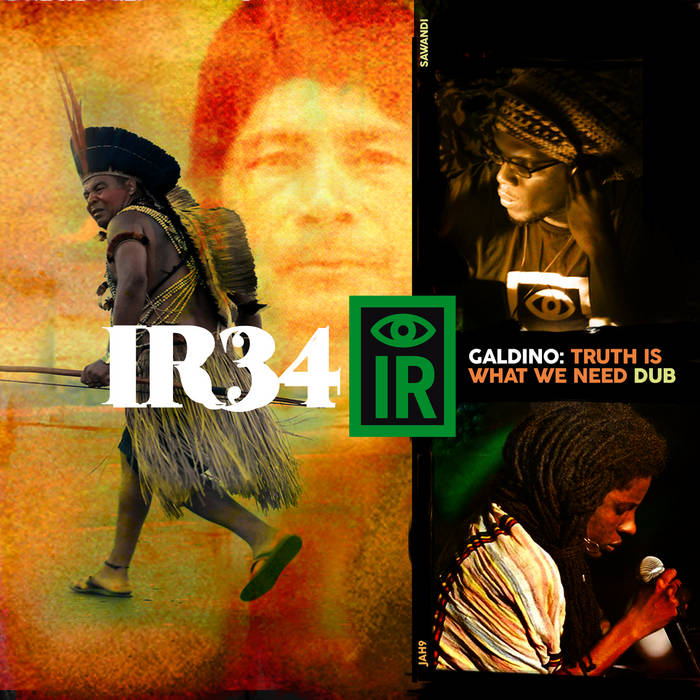 The genesis of our new IR34 release started with the making of the IR33 Korogocho DUBuMentary & Grafitti Experience in Nairobi, Kenya. IR was inspired by circumstances found in the slum of Korogocho to create a mural, the making of which was documented by a local video crew.

(You can watch IR33 here www.dubreality.com/IR33Kenya.html ).

In the editing room, while overlaying dub sounds to the images of the Kenyan graffiti artists painting the IR mural, the IR crew started splicing together edits of our previously released tracks featuring Sawandi, Jah9 and the dub mixing skills of Delroy 'Fatta' Pottinger. These sounds formed the basis of the soundtrack for the film. It also inspired us to revisit the different mixes to create a new dub that would further highlight Sawandi's ethereal keyboards and the soaring vocals of Jah9. The fact that these tracks were focused on the brutal murder of the Brazilian Pataxo Indian, Galdino, and the subsequent amnesia that befell the Brazilian media about the case ever since, had IR thinking of a new way to retell the truth about Galdino. And so, the IR crew decided to make IR34.

A back and forth process began across the internet oceans between The Ghost and Tapedave. Tapedave using his editing skills and creative imagination to flow with the guidelines on drum and bass sounds being offered from The Ghost. The result is "Galdino: Truth Is What We Need Dub (the Tapedave Transparente Remix)” A dub track mixed at Anchor Studio in Kingston ,Jamaica with real roots drumming from Kush, an integral member of Jamaica's Roots Uprising band laying the steady floor under which Sawandi's ethereal keyboards float, lending a mystical vibe to compliment the searing lyrics written by Jah9 and Tapedave.

In order to make certain the bass on the final mix would be rich and dub heavy, IR had to enlist the services of Kevin Metcalfe of Soundmasters in the UK (www.soundmasters.co.uk) to master the new remix and remaster the original Sawandi's Defiance In The Shadows Mix. Kevin is one of the most sought after mastering engineers and for good reason; having cut his teeth on The Kinks andDavid Bowie albums for RCA and then mastered classic albums by folks like Dennis Brown, Lee Scratch Perry, Black Uhuru to The Clash, Dead Kennedys, Robert Plant and numerous Adrian Sherwood On U Sound records. In fact our favorite 10-inch vinyl “Keep On Dancing” by Bim Sherman & Dub Syndicate was mastered by Kevin Metcalfe. We wanted that same heavy drum and bass we’ve heard on massive soundsystems; crisp, yet thundering. Kevin certainly didn’t disappoint! He brought out the bass beautifully, which then infused the IR34 mixes with an extra energy. It was then IR decided to create the very special Bandcamp-only EP you see here.

This EP includes a special remix that Adrian Sherwood so generously did for us. that also features Dr Das on bass and Skip Mcdonald on guitar. This track features Patoxi singers from Brazil alongside the original rapper for Asian Dub Foundation, Deeder Zaman. In 2010, Deeder had gone to Brasil and performed at shows in Galdino’s memory organized by Dubdem Soundsystem with IR.

The EP finishes off with a special sonic surprise, an audio ambush so to speak, though an assault of effervesence. Here is a pure high energy groove track from Caballo. He’s remixed his “Pow Wow Bounce,” this is his V.I.P Mix For I.R. Caballo centers aboriginal chants from Canada in a pure swinging groove. It is true dance floor fire. IR believes there are different ways to fight the power as anarchist Emma Goldman once said "If I can't dance to it, it’s not my revolution.” Here Caballo expresses his anti-colonialist sentiments with hypnotic grooves.

IR tends to focus on issues that many media outlets have no time for, and certain governments try to sweep under the rug. One is the land grab taking place in Gambella, Ethiopia where the indigenous people are being killed and displaced from their lands in order for foreign corporations can lease the land by the Ethopian government.

Like this issue, Galdino is a topic that both the media and Brasil’s bureaucrats would like to see disappeared. The story of Galdino is not just a story of one man and four elitist thugs turned murderers. The story of Galdino encompasses the larger problems of Brasil and how they, as a nation, deal with the Indigenous and why the media in Brasil is so reluctant to revisit the circumstances of Galdino’s murder. Instead the media and the politicians would prefer it to be erased from the collective consciousness of the nation, for, when you deal with the murder of Galdino, you are forced to deal head on with the injustice perpetrated against the Indigenous since Europeans invaded their land. You are forced to examine the inequality between those with money and those without, those with privilege and those without, and how this affects how your life is valued or not. Many uncomfortable questions and many more unsuitable answers. It is easier for the nation if the story of Galdino were left to disappear, but we, IR, won’t let it. Our efforts have been worldwide; from Ethiopia to Jamaica to Colombia and on, always returning back to Brasil.

A special feature of this Bandcamp release is a special exclusive publication entitled IR35 Truth Is What You Gain. Designed by Tapedave, with graphic art by Dubdem, photos from Fabdub, Sabriya Simon,Ramjac, Gebre Amlak and with text by Kokonda Dub and The Ghost, this little book not only tries to impart a deeper insight into the case of Galdino, but to also give a more profound look at the stereotypes and realities facing indigenous people in Brazi. Inside this publication, readers will also see examples of IR activism organized in Brazil, Colombia, Ethiopia and Jamaica, to help remember Galdino.

In keeping with IR practice of utilizing public spaces to communicate our messages, IR will be working with Colombia Rebel Youth and artists like Chite Yarumo to reproduce the cover art for IR34, designed by Dubdem, and paint it as a mural in Colombia. Stay tuned for that and more subversive actions from IR.
Soundcloud preview
soundcloud.com/ir-indigenous-resistance/sets/ir-34-galdino-truth-is-what-we